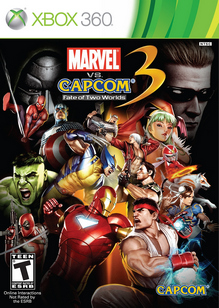 No explanation was given but Capcom’s license to Marvel properties was clearly the cause for the delistings.

Nearly one year later in December of 2014, Capcom’s remaining digital Marvel title, Marvel vs. Capcom Origins, would be delisted on PlayStation 3 and Xbox 360. Shortly after that, on January 1st, 2014, many of Activision’s Spider-Man and X-Men titles would be delisted. Similar expired licenses from Marvel were the cause for all of these delistings.

“After a decade of waiting, iconic Marvel and Capcom characters join forces again in a re-envisioned team fighting game for a new generation. Fill the shoes of legendary characters from both the Marvel and Capcom Universes as you battle in a living comic book art style powered by Capcom’s MT Framework, an advanced version of the graphics engine used for Resident Evil 5. Get set for the ultimate faceoff when Marvel vs. Capcom 3 hits Xbox 360 and PlayStation 3 in Spring 2011.

Innovative graphics and gameplay bring the Marvel and Capcom Universes to life: Powered by an advanced version of MT Framework, the engine used in Resident Evil 5 and Lost Planet 2, Marvel vs. Capcom 3 brings beautiful backgrounds and character animations to the forefront.”