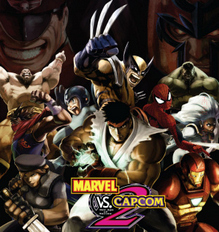 No explanation was given but Capcom’s license to Marvel properties was clearly the cause for the delistings.

Nearly one year later in December of 2014, Capcom’s remaining digital Marvel title, Marvel vs. Capcom Origins, would be delisted on PlayStation 3 and Xbox 360. Shortly after that, on January 1st, 2014, many of Activision’s Spider-Man and X-Men titles would be delisted. Similar expired licenses from Marvel were the cause for all of these delistings.

“Marvel VS. Capcom 2 features the biggest roster of challengers to ever square off in a Capcom fighting game, a total of 56 combined brawlers from both the Capcom and Marvel universes. From the world of Capcom comes characters such as Ryu from the Street Fighter® series, Jill Valentine from the Resident Evil® games and unofficial company mascot Mega Man®. Marvel is represented by some of its biggest names, including the Invincible Iron Man, Captain America, the Sentinel of Liberty, and War Machine, Weapon of S.H.I.E.L.D. Players can mix and match from both worlds in order to create their own ideal three man/woman/robot/monster team-up.”
– Capcom press release