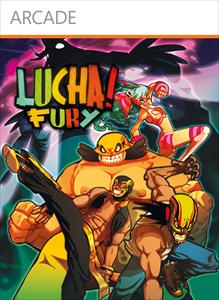 Lucha Fury was delisted on Xbox 360 no later than November 26, 2011. This was the earliest date that the game’s availability was put into question on a GameFAQs board post.

Lucha Fury was delisted due to the closure of Punchers Impact in May 2011, after its parent company Mindscape Inc. announced that it would cease game development. With no company available to maintain the game, it was quickly removed from sale.

On January 5, 2012, Chillingo bought the rights to Lucha Fury and ported the game to iOS under the name Street Wrestler. Street Wrestler has since been removed from the App Store.

Lucha Fury is a frantic, wacky, Beat’em Up set in the crazy colorful world of Lucha Libre, masked Mexican wrestling. – Encounter hoards of loco enemies and head-case Bosses all disguised with crazy masks. – Play with up to 4 friends in cooperation mode to unleash devastating combos, or play solo and line up spectacular array of attack. – Strut your stuff using provocation, submissions, planchas and other stylish moves to win Fever points and send your scores soaring. – Go on a wild journey through the stylized world of Lucha Libre brought to life through far-out story-telling, dumb humor, bad taste, and surprises galore…