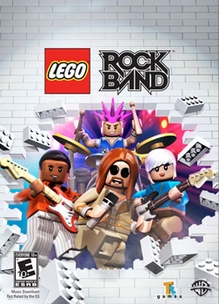 LEGO Rock Band was likely delisted around November of 2015 on Xbox 360. We could not find confirmation of the timing but Harmonix’s titles are typically delisted near their five-year anniversary. The game was delisted due to expired licensing of the numerous songs featured in the game.

LEGO Rock Band merges two of the most popular videogame franchises to deliver a unique family-friendly music experience that will take tweens, teens, families, and gamers of all ages on a wild journey to rock stardom in order to “Build a Band and Rock the Universe.”

Combining the authentic multiplayer music experience of Rock Band with the accessibility, customization and humor of LEGO games, LEGO Rock Band allows players to create their own unique rock star style and customize their own avatars, band members, roadies, and managers. As players successfully complete songs and rock challenges, they can collect LEGO studs and unlock additional content to take their band from local gigs at rock clubs to epic stadium shows and even fantasy settings on Earth and beyond. Available now.