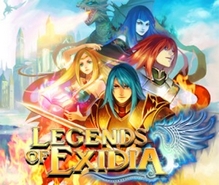 Legends of Exidia was delisted from the Nintendo 3DS eShop in North America on December 7, 2016, when a user on GameFAQs reported that the game’s listing was removed. In Europe, the game was confirmed delisted the day after.

Legends of Exidia was mostly likely delisted due to the game being used as an exploit for soft-modding Nintendo DSi and 3DS systems. Nintendo likely pulled the game from sale as it may have been unable to be patched by the original developers.

If not removed in 2016, the game was delisted from the DSi itself by March 31st, 2017 when Nintendo shut down the DSi Shop.

Legends of Exidia was originally released on J2ME based phones under the title Might and Magic Mobile II in 2007, and was retitled for it’s 2010 DSiWare release.

“An army of demons, the Morgost, has invaded Exidia, defeated the Princess Sofia and captured the Orb of Spell. Help Sofia drive back this threat: as a fearless warrior, you’ll fight the most evil creatures and, with every quest, you’ll get closer to discovering the source of the plague.“