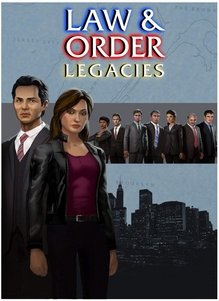 Law & Order: Legacies was delisted alongside Telltale Games’ CSI titles in 2015. On Steam the game was removed from sale on November 18th, 2015 but remained available in the ~$200 Telltale Games bundle through most of that year. All of these delistings were most likely caused by expired licensing from their respective TV show owners.

“In Law & Order: Legacies, you will play as the detectives, questioning a range of suspects—then use your knowledge of the case to evaluate whether they are lying or telling the truth. You can also search the scene of a crime for clues, and use those clues in your investigation.Once in court, you will act as prosecutors to elicit testimony on the stand, and object to the Defense attorneys when they get out of line.

As the jury watches, their sympathies will sway to one side or the other. The jury’s feelings about your case will affect the outcome, as well as your ability to negotiate a good plea bargain—should you choose to do so.Law & Order: Legacies puts the outcome in your hands.“