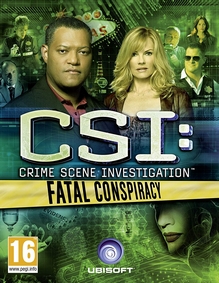 CSI: Fatal Conspiracy was delisted alongside Telltale Games’ other CSI and Law & Order titles in 2015. On Xbox 360 it was last confirmed available on August 23rd, 2015 and removed by September 7th, 2015. It was presumably delisted from PlayStation 3 and PC around this same time. All of these delistings were most likely caused by expired licensing from their respective TV show owners.

“Partner with FBI agent Gene Huntby in 5 connected cases. He’ll both help and challenge you in a hunt for the Queen of the Hive, a formidable drug lord that may be behind a series of shocking murders.

Work with your CSI partners to uncover the Fatal Conspiracy behind the crimes you investigate. You will question the integrity of even your own CSI teammates as suspicions arise of infiltration by the powerful criminal organization.

While exploring crime scenes, analyzing unusual evidence, or following the twists of the story, CSI: Fatal Conspiracy is an all new immersive experience thanks to intriguing cases written with CSI show writers, an updated rendering engine with more realistic lighting effects, and enhanced character acting and lip sync with the voices of the main actors from the show.

Collect and analyze evidence with the latest technology such as DNA analysis, microscopic analysis, and audio/video analysis and interview suspects and witnesses to get the ultimate truth!“