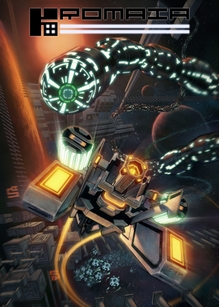 GOG.com PR representative, emter_pl, announced on November 22nd, 2019 that two titles from publisher Rising Star Games would be delisted from the store later that same day. Both Kromaia and The Marvelous Miss Take were removed from sale on GOG.com at 2pm UTC time. The brief announcement explained only that “expired licenses” were the cause of the delistings.

Kromaia Omega was later delisted from the PlayStation Store no later than February 2021, according to a post on PSNProfiles. Kromaia remains available on Steam where it is now self-published by Kraken Empire, and on physical media for PlayStation 4.

“The frantic old-school action of classic coin-op shoot-‘em-ups comes crashing headlong into the 21st century with Kromaia Ω. Explosive high-octane blasting combines with hordes of enemies in a 360˚ environment – experience the next level in bullet-hell brutality!

Set in three-dimensional space, you’re free not just to explore but also dodge and blast through hordes of enemies all intent on destroying you! Adaptive AI scales to your skill level, while giant bosses wait to push you to the very edge. Pilot unique craft, each with their own weapon styles, to annihilate everything in your path – or, for an extra challenge, take on Pure Mode and try to ace the game in a single life!“