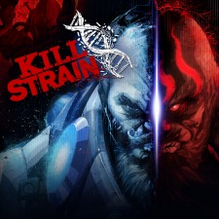 No explanation was given — the game’s social media accounts went silent just months after release — but low player retention and sales of content are likely the cause. The game’s homepage offers several leaderboards of recent activity and for the day of October 5th, 2017 it appears there were just 103 players.

“The Strain has emerged in our world and mankind is keen to exploit its power. Mercenaries and Mutants take sides in an epic confrontation. Will you help protect our world from the Strain, or exploit its resources in the name of power and personal gain?“

Inventive 5v5v2 Gameplay: Two teams of (5) humans and one team of (2) mutants engage in a three-way tug of war for control of the battlefield

Dynamic Team-Sizing: Kill Strain introduces a novel cyclical “turning” mechanic where players turn their enemies from humans to mutants in order to build their team

Free to Play: Kill Strain is free to download and play, but never pay to win.

High Replayability: The “turning” mechanic delivers players a fresh experience every round. Kill Strain will also roll out new content for players to upgrade their characters, new maps, and more on a regular basis

Thanks to an anonymous reader for submitting this information to the site.