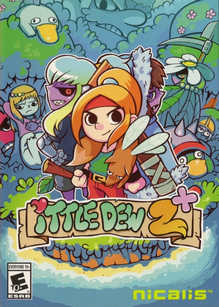 Ittle Dew 2 (aka Ittle Dew 2+) was delisted from the Nintendo Switch, PlayStation 4, and Xbox One on September 19th, 2019. It remained available briefly in European territories but was soon delisted globally wherever it was published by Nicalis. Ludosity CEO Joel Nyström took to Twitter on September 20th (tweets now deleted) to explain the studio’s frustrations with the publisher:

Can definitely confirm that Nicalis is a piece of shit publisher – after being surprised to find out (by looking in their email inbox) that we cancelled their license to publish 6 months ago, they first agreed to transfer the games over to us.

Well after the usual ghosting for a few weeks I today wake up to find that they just couldn’t be bothered, and just delisted Ittle Dew 2 from all console store fronts. Another promise to us they just straight up broke – and a shitty move for the customers. Now I’m gonna see if I can get them de-delisted or if I have to re-publish.

Ittle Dew 2+ then returned to Nintendo Switch in North America and Europe on March 19th, 2020, allegedly as a new listing meaning that those who own the Nicalis release were not able to transition or upgrade to the 2020 version. In another Twitter reply at the time, Nyström confirmed that a new Xbox One release was also in the works.

As of March 2022 the game does not appear in search on Nintendo.com but can be found with a new URL on the web. It is searchable directly from a Nintendo Switch. As far as we can confirm, the game was not delisted again in Europe and has remained available there since 2020. The Xbox One release that Nyström mentioned also has not materialized as of March 2022.

ttle and Tippsie crash onto yet another island filled with loot, puzzles and mysterious inhabitants! With the help of a magical map, they set out to steal eight pieces of a raft from increasingly improbable locations including beaches, prairies, an art exhibit and some dude’s basement.

Ittle Dew 2 is a charming and humorous 3D Action Adventure game with a focus on exploration and combat. Tackle the game’s dungeons in any order and discover the many secrets of its expansive overworld. With only four main weapons, combat and puzzling is streamlined, yet upgradeable inventory items add RPG-like character progression!