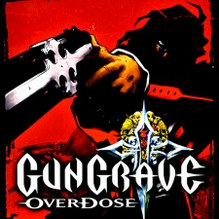 The PlayStation 2 Classic version of Gungrave: Overdose was delisted on PlayStation 3 in North America no later than October 16th, 2014. On that day, Cheap Ass Gamer forum user Corgstradamus made a post listing games that were no longer available on PlayStation Network. No earlier mention of the game’s availability has been found so far.

“Gungrave O.D. takes the carnage-based formula of the original, adds more characters and some new abilities to the mix. Expanding on its predecessor, it throws you in a cel-shaded world of exaggerated firefights and near delirious action sequences. In addition to franchise hero Grave, there are two additional fighters to choose from: Rocketbilly Redcadillac and Juji Kabane, who meet up with Grave at the beginning of the game. With the exception of the very first training battle, all three characters have the same set of missions to go through and deliver a different experience.“