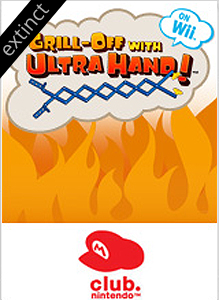 Unlike Doc Louis’s Punch-Out!!, Gril-Off remained available to “purchase” for 80 Club Nintendo Coins from March 31st through the final days of the US Club Nintendo site in 2015. As of July 31st, 2015 all download codes from the former Club Nintendo site have expired making the game unavailable.