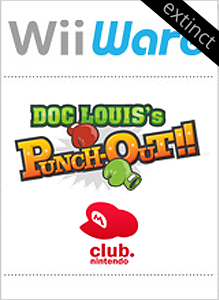 Doc-Louis’s Punch-Out!! was announced on July 14, 2009 in an email to Club Nintendo members. The downloadable game would be available exclusively to members who reached Platinum status by June 30, 2009 and would be released starting October 27th. Download codes for the game expired on June 30th, 2010 making the game unavailable until it was brought back for the closing months of Club Nintendo in 2015. As of July 31st, 2015 all download codes from the former Club Nintendo site have expired making the game once again unavailable.

“It’s Little Mac vs. Doc Louis!! Step into Little Mac’s shoes and challenge your mentor and coach, Doc Louis, to prove you have what it takes to become the World Video Boxing Association World Champion. This unique one-on-one bout builds off of the fun and excitement found in the retail version of Punch-Out!! for the Wii console with three matches against Doc Louis himself: Warm-Up, Training and Sparring; each getting increasingly difficult.”