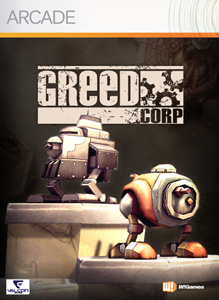 Greed Corp was most likely delisted in the first week of January 2018. TrueAchievements.com posted a delisting roundup on January 9th featuring nine titles from publisher Valcon Games. As of August 2019 each title remains available to download on Steam, PlayStation 3, or both (as well as on physical media for various platforms).

Greed Corp is an award winning, innovative turn-based strategy game, situated in a rich, fictional world inspired by the industrial revolutions and their destructive effects on the environment. Find the delicate balance between harvesting the land for resources and preserving it to stay alive. Will you defend your territory or sacrifice it to keep it out of enemy hands? Manage the finite available resources to build your army and use the collapsing terrain to your advantage.

Destroy your enemies, or destroy the very land they stand on, before they do it to you.