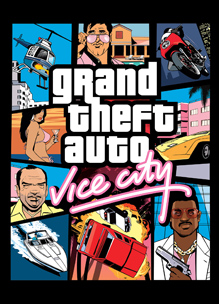 Rockstar Games announced on October 8th, 2021 that a 20th Anniversary Grand Theft Auto trilogy was on the way and that they would begin removing existing versions of the first three 3D titles (GTA 3, Vice City, and San Andreas) from digital stores starting the week of October 11th, 2021. The PS2 Classics release of Vice City for PlayStation 3 had already been delisted in Australian and European regions by the time of this announcement. We last confirmed its availability one year prior in October of 2020 so the game was delisted in these regions at some point in the time between. While other versions were then delisted during the week of October 11th, 2021, the PlayStation 3 release for North America remained available.

Welcome to the 1980s. From the decade of big hair, excess, and pastel suits comes a story of one man’s rise to the top of the criminal pile as Grand Theft Auto returns.

Vice City is a huge urban sprawl ranging from the beach to the swamps and the glitz to the ghetto, and is the most varied, complete, and alive digital city ever created. Combining non-linear gameplay with a character-driven narrative, you arrive in a town brimming with delights and degradation and are given the opportunity to take it over as you choose.