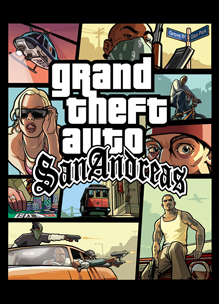 The Xbox Originals version of San Andreas for Xbox 360 was delisted in October of 2014 and replaced by a new ‘Grand Theft Auto: San Andreas (Games on Demand)’ version. While this release commemorated the tenth anniversary of the original PlayStation 2 version, the delisting was also necessary as licensing for several songs found in the game had expired.

On PlayStation 3, the PS2 Classics release of San Andreas was reportedly delisted around October of 2014 but returned some time later and persisted until a separate 2015 release replaced it. The newer Xbox 360 (2014) and PlayStation 3 (2015) versions were based on mobile ports and while they offer some improvements there are several changes from the emulated originals. The soundtrack has been edited due to licensing, new bugs impede progress, and controls and handling are changed. Also due to these changes in licensing, owners of any version of San Andreas on Xbox or Xbox 360 will only be able to access the 2014 version when inserting the disc into an Xbox One or Xbox Series X|S to download the backward compatible package.

Rockstar Games then announced on October 8th, 2021 that a 20th Anniversary Grand Theft Auto trilogy was on the way and that they would begin removing existing versions of the first three 3D titles (GTA 3, Vice City, and San Andreas) from digital stores starting the week of October 11th, 2021. While other versions were then delisted in this timeframe, the PlayStation 3 release for North America remained available.

It appears that the 2015 release of Grand Theft Auto: San Andreas for PlayStation 3 was relisted no later than November 20th, 2021 in North America along with the ‘Grand Theft Auto: The Trilogy (PS2 Classics Bundle)’. Please note, the bundle was released in 2015 and the version of San Andreas included is likely not the original PS2 Classics release.

Five years ago Carl Johnson escaped from the pressures of life in Los Santos, San Andreas — a city tearing itself apart with gang trouble, drugs, and corruption. Where film stars and millionaires do their best to avoid the dealers and gangbangers.

Now, it’s the early ’90s. Carl’s got to go home. His mother has been murdered, his family has fallen apart and his childhood friends are all heading toward disaster.

On his return to the neighborhood, a couple of corrupt cops frame him for homicide. CJ is forced on a journey that takes him across the entire state of San Andreas, to save his family and to take control of the streets.