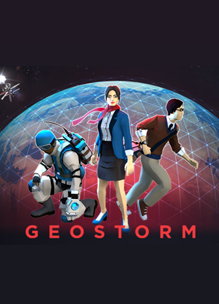 Sticky Studios posted a brief update to Steam on February 1st, 2021 to announce that Geostorm – Turn Based Puzzle Game would soon be delisted. The game would ultimately be removed from sale on February 3rd.

Hi! We are announcing we will be pulling Geostorm from Steam. As the game requires no active internet connection, this will not affect your purchase. We hope you enjoyed playing this game. Stay safe!

Sticky Studios was absorbed by enterprise VR house, Talespin, in February of 2020. The delisting could be related to their change in operating status or an expired movie license from Warner Bros. Pictures. Sticky Studios previously released Steam VR and Oculus titles based on other WB movies including Rampage, Suicide Squad, and Tomb Raider (2018).

Play the official game of the movie now! Earth needs your help! Can you escape disaster and prevent catastrophic climate breakdown? Stay one step ahead to stay alive in this deadly, turn-based puzzle game.

A network of weather-controlling satellites meant to protect Earth has been sabotaged. Catastrophic weather events are destroying cities across the globe. Experience these disasters up close as you gather essential data to prevent a Geostorm while trying to escape the havoc in this immersive 3D puzzle game.

“Geostorm is better than it has any right to be, and it’s well worth a look” – Pocket Gamer