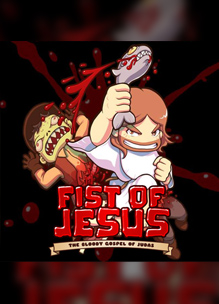 Fist of Jesus was initially delisted no later than September of 2016 when the digital marketplace Desura shut down. The game was then delisted from Steam on November 30th, 2017. The delisting seems to be related to publisher Big Star Games ceasing operations. Their social media accounts were most recently updated in 2017 alongside the release of Bloody Days while their website appears to have gone down in the Summer of 2018. Big Star Games’ only other release, Reservoir Dogs: Bloody Days, was also delisted from Steam on November 30th.

Fist of Jesus is a hilarious gore beat’em up classic style arcade game with RPG depth. Life of Brian meets gore and humor, in the game based on the epic award-winner short-film Fist of Jesus.

Fist of Jesus tells the adventures of Jesus and Judas, where the world is now full of Zombies caused by Lazarus’ resurrection. Cowboys, the Roman Army, Mythological Creatures and Steampunk technology in the 80’s style, all packed with lots of fun.

Get ready to slash hordes of living dead and play an absolutely unique game!