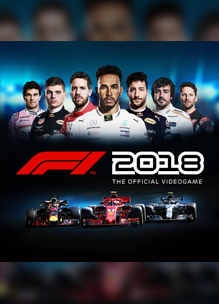 F1® 2018 is the official videogame of the 2018 FIA FORMULA ONE WORLD CHAMPIONSHIP™. Become immersed in the world of Formula 1® more than ever before.

Build your reputation both on and off the track, with time-pressured media interviews that influence your F1 career path. Do you exhibit sportsmanship or showmanship? Will you develop your team to the top or send your agent to target a rival team and driver? F1 2018 puts you in control of your destiny.