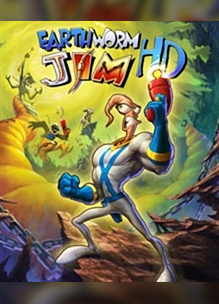 Earthworm Jim HD was delisted on Xbox 360 in February of 2018 according to reporting by TrueAchievements.com. The PlayStation 3 version was likely delisted around the same time. The delisting is likely due to expired licensing between HD’s publisher Gameloft, and the Earthworm Jim rightsholder, Interplay. Older PC versions of Earthworm Jim titles remain available on Steam as published by Interplay.

Groovy! One of the all-time most iconic video game characters is back in full HD glory! Join Jim on a wacky quest across the galaxy to rescue Princess What’s-Her-Name and defeat the insane Psy-Crow! Master Jim’s far-out powers, use his body as a whip, bungee jump, throw cows, blast through rocket-speed levels and more! Explore a crazy universe offering wild gameplay and hilarious possibilities. Overcome mad baddies, including new enemies in never-before-seen levels. Get help from 1, 2 or 3 friends with the exclusive cooperative gameplay in multiplayer levels.