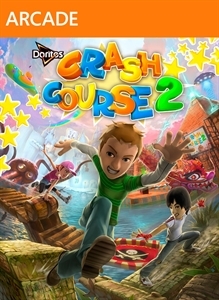 Microsoft announced on April 17th, 2014 that servers for Doritos Crash Course 2 would be shut down on October 15th. The ability to download the free game was removed the following week on April 24th. For the following months the game would “remain unchanged and playable” except for the removal of Coin Packs, in-game currency purchasable with real money. The statement concluded “players with unspent coins can purchase in-game consumables but will be unable to purchase Coin Packs”.

The game’s removal is peculiar as the original Doritos Crash Course is still available to this day and was even added to Xbox One backward compatibility. Behaviour Interactive developed both titles so it seems unrelated to the studio. The likely explanation is that not enough income was being generated by the purchase of Coin Packs to justify the costs to keep it online.

“Doritos Crash Course 2 is the sequel to the XBLA smash hit Doritos Crash Course. Run, jump, slide and wall jump your Avatar through 4 new worlds of irreverent obstacles, traps and pitfalls. In this 2.5 platformer, compete for medals and find stars to progress. Use your stars to unlock new courses, power-ups and vanity items. Compare your best time against up to 3 asynchronous game clips of your friends.“