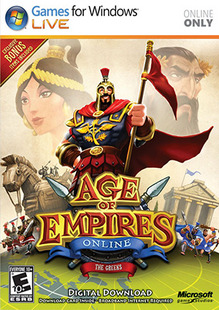 Age of Empires Online was delisted from Steam on August 22nd, 2013 and also rendered inaccessible to new players on PC. August 22nd is the date that the Games for Windows – Live Marketplace was shut down, meaning only existing owners were able to continue playing. In September of 2013 Microsoft support forums and the Age of Empires Online blog confirmed that the game would be taken offline on July 1st, 2014 when the ovearching Games for Windows – Live service was to be shut down.

Had the game proven to be more successful it may have been updated after the GFWL service was retired. However, in August of 2013 Polygon reported from the Game Developers Conference in Europe where Microsoft Studios executive producer Kevin Perry admitted to the game’s downfall:

“Speaking during a presentation at GDC Europe 2013, Perry said the real-time strategy massively multiplayer online game launched two years ago as ‘an okay game but with a bad free-to-play business model.’ Perry said the game started at launch in 2011 with 100,000 active users before it ‘fell right off a cliff,’ with only 15,000 users active by December and almost no revenue.”

Project Celeste is a fan endeavor to bring Age of Empires Online and all of its content back online. While new servers have been launched to support online play and balancing updates happen regularly, this is not an official relisting or retail re-release of the game. However, it is fantastic news for fans of the game!! Visit the project’s homepage here or check out this forum thread on how to start playing the game again.

“Age of Empires Online is the next chapter in the best-selling Age of Empires PC franchise. The game features some of the greatest ancient civilizations and offer more than hundreds of hours of gameplay for free. Showcasing a unique art style, AoEO offers a free-to-play experience for both single players and fans of coop and PvP. Battle, chat, and trade with fellow warriors in rich new worlds!

Capital Cities offer a central focal point for your empire from which you start your quests or travel to other regions. Vanity allows you to decorate your Capital Cities and units to your hearts’ content.  Champion Mode offers the option to play against PvP opponents without gear being taken into consideration, providing equal footing for paid players and players with free accounts.“