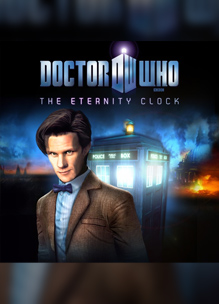 Doctor Who: The Eternity Clock was delisted on Steam around May 9th, 2017. The game was delisted on PlayStation 3 across Australian and European territories no later than October of 2020. The PlayStation Vita release remains available in all territories as of this writing. Doctor Who: The Eternity Clock was released on physical media for PlayStation 3 exclusively in Europe and remains available in limited supply.

The cause for the delisting is uncertain but is likely related to expired licensing of the Doctor Who property. Doctor Who: The Adventure Games was also delisted in 2017, created and released by a different developer and publisher entirely.

Play as the Doctor and River Song as they race to save the universe and time itself. Unravel the mystery of The Eternity Clock and stop its deadly path of destruction before it’s too late.

Equipped with the Doctor’s sonic screwdriver, River’s Blaster and other fantastic gadgets, journey through four London time periods and a number of alien locations in search of the answers. Face up to the most fearsome monsters including Silurians, Cybermen, Daleks and the Silence.

Outwit and destroy foes, solve puzzles and make the right choices in an epic action-adventure.