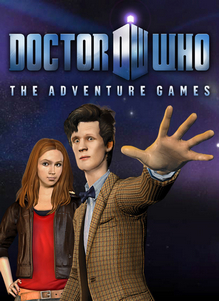 Doctor Who: The Adventure Games was delisted from Steam on June 1st, 2017. Advanced notice was given on May 12th when Legacy Games posted the following notice to the game’s Steam Community forums:

Unfortunately it is time to bid farewell. Our license with the BBC will be expiring soon and this game will be removed from Steam at the end of this month. Previous purchasers will still have access to the game under Steam policy, but no new users will be able to purchase the game starting in June.

We’re glad you’ve enjoyed these great adventure games over the years and we hope to see you soon with new games!

Edit: Apologies, Whovians! There will not be a final sale. Doctor Who: The Adventure Games went on sale just a few weeks ago and unfortunately we are not allowed to put it up on sale again during this time period.

Join the Doctor as his companion in an out-of-this-world adventure through time and space. You will need all your wits and courage to outsmart and defeat some of the Doctors’ most storied enemies like the Daleks, Cybermen, and the Vashta Nerada. Explore the universe, and even see the inner workings of the TARDIS!

Doctor Who The Adventure Games includes: City of Daleks, Blood of the Cybermen, Tardis, Shadows of the Vashta Nerada, The Gunpowder Pilot