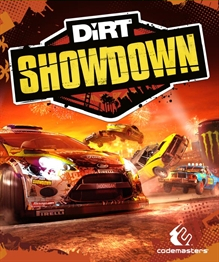 DiRT Showdown was removed from Steam on February 28th, 2017. It was likely delisted from PlayStation 3 and Xbox 360 around this same time. The game was most likely delisted due to expired licensing of real world cars, personalities, or music.

“Race, crash and hoon your way through a world tour of motorized mayhem in DiRT® Showdown™! Social gameplay and stunning graphics combine to deliver a high-octane action sports experience from the get-go. Use boost to race past rivals, smash your way through demolition derbies and unleash your inner Hoonigan in freestyle stunt parks.

DiRT® Showdown™ pushes gaming’s most advanced damage engine to its limits in devastating demolition derbies. Nitro boost, jumps and split routes keep the action tense and exciting in confrontational racing events and Crashbacks let you relive your best crashes and collisions at the push of a button. DiRT® Showdown™ also features splitscreen multiplayer, 8 player online* racing, on and off-line quick-fire party games, Showdown challenges and YouTube integration. Get your ticket for this stunning new world of action-sports racing from the makers of the award-winning DiRT® series.“