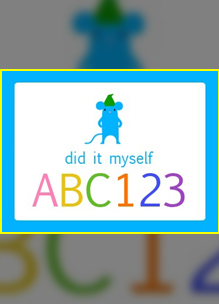 Did It Myself ABC123 was initially delisted from the Nintendo DSi Shop on March 31st, 2017 when the marketplace was shut down on that platform. The game was likely delisted from the Nintendo 3DS eShop alongside Glow Artisan which was approximately removed in the latter portion of 2020. This is when a reader of the site first noticed that Glow Artisan was no longer available, though it could have been delisted earlier.

Fun with counting, colors, letters, drawing, and music! Did It Myself ABC123 is a fun activity-toy-game-thing for young kids. It’s packed with a bunch of different activities to stimulate your young child’s brain, including:

The target age range is about 2-3, but kids aged 1 through 5 should be able to enjoy Did It Myself ABC123. There are options for parents to adjust the counting range, the amount of games to play in “shuffle” mode, and the overall game speed. “Slow” and “medium” are recommended for younger kids, while older kids may enjoy “fast” and “ridiculous.”