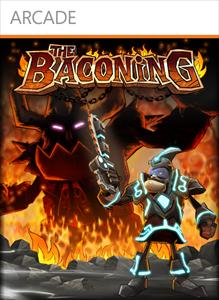 DeathSpank: The Baconing was most likely delisted in the first week of January 2018. TrueAchievements.com posted a delisting roundup on January 9th featuring nine titles from publisher Valcon Games. As of August 2019 each title remains available to download on Steam, PlayStation 3, or both (as well as on physical media for various platforms).

Prepare yourself for the ultimate sci-fi adventure by entering the hilarious and sizzling world of The Baconing™ created by Hothead Games. You are DeathSpank, a hero and the ultimate Dispenser of Justice. You must defeat the Anti-Spank and his army of Cyborques, before they cast an evil shadow over Spanktopia.

Discover exciting new worlds and battle hordes of enemies as you search to unlock the secret within the Fires of Bacon.