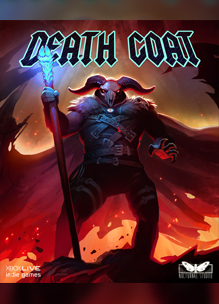 Death Goat was first delisted on Xbox 360 no later than October 7th, 2017 when the Xbox Live Indie Games marketplace was shut down. One month prior to this, the game was added to online databases as an Xbox One title but no confirmation of that release or delisting has been found. Death Goat was next delisted on Steam on December 11th, 2019.

Although the game does feature an array of licensed metal music, the delisting appears to be related to Terminal Press’s move away from game development. Since it launched, Terminal Press has been a comic book publisher, a mobile app developer, a game developer, and most recently a “community resource” in the Virtual and Augmented Reality sectors. The official Death Goat Twitter account hasn’t been active since 2016. Creator Bian Ferrara hasn’t been involved in another Steam release in just as long, the last being ‘Grey‘ which was greenlit on Steam in 2016 but never completed. Death Goat was Terminal Press’s only release on Steam.