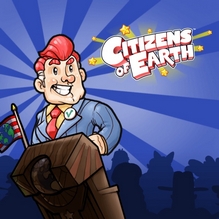 Citizens of Earth was initially removed from the Nintendo 3DS eShop no later than May 13th, 2016 by Nintendo after the game was found to be used in a new exploit. Dubbed the “humblehax”, the exploit’s release seems to have been timed with the game’s inclusion in the Humble Friends of Nintendo Bundle though no statement of intent has been made. After being updated the 3DS version returned to sale no later than July 30th, 2016.

The game was next delisted from the Nintendo 3DS, PlayStation 4, and PlayStation Vita in Japan on May 31st, 2019. The game was published exclusively in Japan by Arc System Works and as of this writing remains available worldwide where published on consoles by Atlus and on Steam by Sega. The delisting is most likely due to expired licensing between Arc System Works and developer Eden Industries.

“Citizens of Earth pits players as the second-highest-paid bureaucrat in the land. The game begins just after winning a long, drawn-out candidacy – the VP returns to his hometown for some taxpayer-funded rest and relaxation. But after just one night passes, the VP awakens to find the world gone berserk! As elected official he has two responsibilities: investigate what’s caused people to go crazy… and delegate as much of the dirty work as possible.  Citizens of Earth has 40 wacky citizens to recruit and send into battle!“

Citizens of Earth features include:

Gotta Recruit ’em All – Every vote counts, and sometimes you have to do some pretty shameful things to get them… Citizens of Earth has 40 citizens to collect to fight in your party, each with their own unique play-style and out-of-combat world abilities. Everyone in town will lend a hand, from the way-too-jittery Barista and the ever-optimistic Weatherlady to the notoriously skeezy car salesman and the ridiculously shy (and totally real) Sasquatch!

Occupy Earth! – It’s time to take back Earth from the opposition. There are no random encounters in Citizens of Earth; you’ll see every enemy on the field before you fight them. So go ahead and maneuver around those unwanted encounters or command your constituents to charge in for an ambush! As long as the VP’s got a party to do his dirty work, it’s all good!

It’s Déjà Vu All Over Again… But Better – Citizens of Earth has some serious nostalgic cues, but don’t worry, we didn’t skimp on the graphics for the sake of being retro. This title goes far beyond the 16-bit standard, with real-time lighting, HD art, a day/night cycle, weather effects, and more.

Four- or Eight-Year Terms – The depth of content in Citizens of Earth means you can play a quick and casual adventure or a white-knuckle, pray-you-survive-until-the-next-turn grind-fest! The game is filled with hours of bonus content to explore, optional side-quests, and of course, citizens waiting to be recruited!