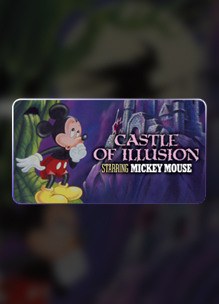 The emulated release of the 1990 title Castle of Illusion – labeled as the “PSN Promotion” or “Limited Time Genesis/Mega Drive Version” – was only available for two brief windows of time. Initially available as a pre-order bonus for the 3D remake, ‘Disney Castle of Illusion starring Mickey Mouse’ in 2013, it was later given away to PlayStation Plus subscribers in North America for two weeks in 2014.

Press material from 2013 confirmed that the game would only be available during the pre-order period and even stated that it would not be sold on the PlayStation Store. It is unclear why this release was exclusive to the PlayStation 3 but may have been part of a co-marketing deal or based on other PlayStation-exclusive work Sega or M2 were involved with at the time.

For a limited time only, customers […] who pre-order Castle of Illusion on PlayStation®Network […] will receive an exclusive downloadable emulated version of the original Mega Drive™ game, one pre-order exclusive dynamic theme and three avatars. Customers who pre-order the game will be able to download these items from launch.
– Sega Press Release (2013)

If you recognize the name Castle of Illusion from back in the day, you should know that this remake doesn’t just offer upgraded graphics, but also periodic restructuring of the classic 2D side-scrolling platforming gameplay into a 3D space. Although the graphics and gameplay are different, the storyline here is the same – dear old Minnie has been kidnapped by an evil witch and its up to you to save her. As an added bonus, if you download this during the first two weeks it’s available in PS Plus you’ll receive the Castle of Illusion Sega Genesis Bundle, which adds the original Sega Genesis version of Castle of Illusion (1990) and a Mizrabel (that’s the evil witch that kidnapped Minnie btw) dynamic theme for free. This bundle will only be available until 4/28 so be sure to download it before then!
– PlayStation Blog Post (2014)

Thanks to @Spindash54 for submitting this game to the site