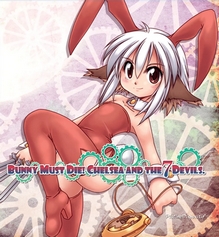 Bunny Must Die! Chelsea and the 7 Devils. was delisted from Steam on August 01, 2019 when its price was set to $0.00. Publisher Rockin’ Android announced the upcoming delisting on July 12th alongside a handful of other retiring Steam releases, all from developer Platine Dispositif:

Greetings Androids! We have a bit of sad news today, the following Rockin’ Android games will be retired from Steam store on July 31st, 2019; Bunny Must Die!, Gundemonium Recollection, GundeadGline and Hitogata Happa. We are sorry for the inconvenience, the original developer Platine Dispositif has decided to retire the games; with the intention to update and publish them on Steam at a later date. Please contact them directly for more details. Also the retired games will no longer be updated.

The decision to retire the games was not ours, but we respect their decision and we thank Platine Dispositif for granting us permission to publish their games and to add our own spin, such as the popular remix soundtracks. It has been an absolute blast working on these games and we’re extremely grateful to the fans, programmers, translators and specially Platine Dispositif for all their wonderful support! Thank you all!!

As of this writing the versions published by Mediascape on PlayStation 4 and PlayStation Vita remain available to buy.

“The year is 1999X. After a curse causes Bunny to grow cat ears when a purrmodynamic power plant explodes, she is led by a chubby and divine messenger into the Cave of Devils so that she can remove the hex.

However, a mad bull appears out of nowhere, killing the messenger after stabbing him 24 times!

The dungeon-crawling action game ‘Bunny Must Die! Chelsea and the 7 Devils’ is now coming to the PlayStation®.

March through the Cave of Devils together with Bunny, her five weapons, and her ability to manipulate time however she pleases!“