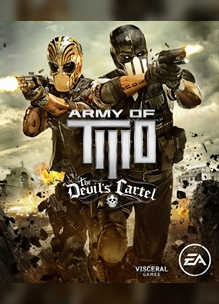 The game’s predecessor, Army of Two: The 40th Day, was also delisted between October and November of 2021. The cause for the delistings is uncertain but may have been related to licensed content featured in each title. The credits for The 40th Day denote that “this product may include in-game sponsorships or product placements” while Devil’s Cartel features music from and the likenesses of hip hop artists B.o.B and Big Boi.

The originator of tactical co-op is back! Developed by Visceral Games, the award-winning creators of Dead Space™, Army of TWO™ The Devil’s Cartel delivers an immersive and unique 3rd-person co-op action-shooter that’s built on the new Frostbite 2 engine for maximum destruction. You and your partner must shoot and destroy anything in your path to take down a violent drug cartel that’s taken over Mexico.

In gripping partner-based missions, each player must tackle and overcome individual objectives to achieve a common goal. The more effective your teamwork, the greater the reward as the new Overkill mode gives you devastating power for truly epic mass destruction! Experience this explosive action-blockbuster campaign in two-player local split-screen or online co-op!