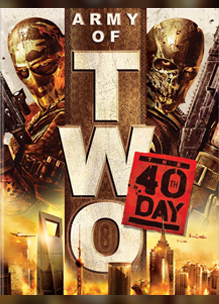 Army of Two: The 40th Day was delisted on Xbox 360 between October and November of 2021. The PSP release may also have been delisted around this same time but could have been removed years prior. The game was submitted to the site on November 12th, 2021 with a Reddit post on January 12th, 2022 also confirming that the game had recently been delisted.

The game’s successor, Army of Two: The Devil’s Cartel, was also delisted in October of 2021. The cause for the delistings is uncertain but may have been related to licensed content featured in each title. The credits for The 40th Day denote that “this product may include in-game sponsorships or product placements” while Devil’s Cartel features music from and the likenesses of hip hop artists B.o.B and Big Boi.

When a man-made disaster of epic proportions strikes Shanghai, China, Rios and Salem find themselves right in the middle of it all. Fortunately for you, you’ve got a bigger playbook of features and a new arsenal of co-op moves that either player can perform at any time, opening up fresh strategies and choices for both players. You’ve also got the tools you need to help the Army of TWO™ fight and prevail with an incredibly deep, advanced weapon customization and upgrade system.