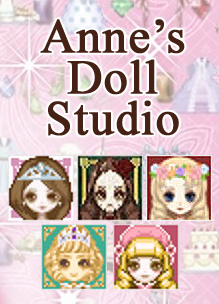 The five titles in the Anne’s Doll Studio (Atelier Deco la Doll) series were initially delisted from the Nintendo DSi Shop on March 31st, 2017 when the marketplace was shut down on that platform. The games were then delisted from the Nintendo 3DS eShop in Europe and North America no later than Late 2020. This is when a reader of the site first noticed that they were no longer available although they could have been delisted earlier.

The content from these five games was later compiled in the Nintendo 3DS title Doll Fashion Atelier (Atelier Deco la Doll Collection), released in 2015 (JP) and 2016 (EU, NA). A retail version of the game was also released in Japan. The five individual titles and their regional release dates follow:

As all of the titles remain available in Japan, where the developer Starfish also served as publisher, the delistings in the West are most likely related to publisher Gamebridge. The compilation title, Doll Fashion Atelier, is published in the West by Teyon.

Use the stylus to choose hair styles, hair accessories, dresses, jackets and shoes, mixing and matching items to create hundreds of beautiful outfit combinations. Once your doll is complete you can choose from various backgrounds and boarder designs to create a stunning picture with your doll center stage. Alternatively set your doll against a background of your choice by taking your own picture using the built-in camera of your Nintendo DSi or Nintendo 3DS system. You can further decorate and your doll by adding stars and other pretty effects or by drawing freehand. Your completed doll pictures can be saved to the SD Card (sold separately) and traded with friends, used on social networks as your avatar picture or printed out using a computer.