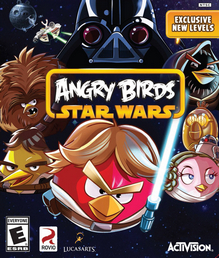 Angry Birds Star Wars was likely delisted in early 2016 on most platforms. The earliest mention found is from February 20th when a user on GameFAQs questioned its availability on PlayStation Vita. On Nintendo.com the last active capture that shows the game as available was on February 23rd, 2016 and even earlier on Xbox.com, on June 1st, 2015.

“Join an epic adventure with the Angry Birds in the legendary Star Wars™ universe, re-mastered for gaming systems! Use the Force, wield your Lightsaber, and blast away Pigtroopers on an intergalactic journey from the deserts of Tatooine to the depths of the Pig Star — where you’ll face off against the terrifying Darth Vader, Dark Lord of the Pigs! Can you become a Jedi Master and restore freedom to the galaxy? May the birds be with you!“