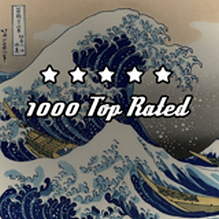 1000 Top Rated was delisted on PlayStation Network for PlayStation 4 on June 28th, 2017, within 36 hours of release. The description and trailer for the game on PSN and PlayStation.com touted a cheap and easy Platinum Trophy, something Sony apparently didn’t agree with once the game was released. In a post on June 28th to the developer’s Facebook page they first explained that the game had been pulled due to a bug. By that evening the messaging had changed and the developer explained in a follow-up post:

“Sony has pulled the game temporarily and asked me to change the game’s name & not mention trophies in the Store trailer. I am happy to comply! I don’t know when it will be released again, but I’ll update this page as soon as I know.”

As of October 17th, however, that re-release hasn’t happened. Ultimately, in response to criticism the game received or as a plea to Sony’s certification team, the developer made a final post on June 30th. In it they defend Sony’s decision and certification process, explaining some of the back-and-forth they received:

“For months and months they diligently, carefully, professionally, questioned me, requestioned, asked for changes, asked for submissions and resubmissions until the game met every standard, and in the end they proved they love indie developers enough to give it their blessing…even if they still squinted at it sideways.”

Sony has yet to make a public statement about their decision but shortly after the delisting they also removed the game’s PlayStation.com page. This rarely happens with delisted titles and is taken as a sign that the game will not be returning. The June 30th post remains as the last significant public update from Top Rated although the developer has continued releasing themes and avatar icons on PlayStation Network.

“How would you like to win a platinum trophy in just one hour? How’s the idea of 1000 4k images grab ya? Art thou ready to platinum up? ★★★★★ 1000 Top Rated – the world’s fastest platinum trophy game.