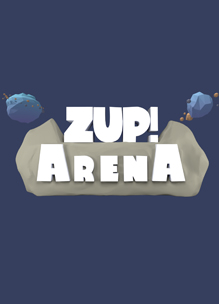 Zup! Arena was delisted on Steam on October 6th, 2019 one day after developer Quiet River announced its removal.

Zup bro! Soon the game will be removed from steam. If you are a collector – you have time to get in-game items for your collection. Thanks to everyone who played my game. Unfortunately the project is absolutely unsuccessful, I apologize to each player. Sorry

The game transitioned to a free-to-play model in February of 2019 and was apparently the reason for its removal nine months later. According to a Steam Community forum post the game became unplayable on October 12th. Quiet River also updated the title to remove all in-game Achievements except for one.

Zup! Arena is a multiplayer arcade game in which you have to fight with other players! Throw off all your opponents from the battlefield and become the “King of the mountain”. Play alone or in a group with friends!

Earn Zup-bucks for winning and participating in battles and use customization to make your character unique and the cutest! Fight on one of 6 unique arenas!

Level up to get additional rewards and unique decorations of the game profile!

Thanks to UNSOCIAL96 for submitting this game to the site