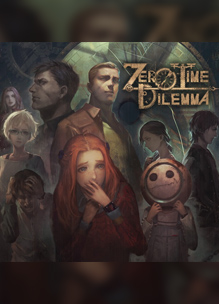 Zero Time Dilemma was delisted on Nintendo 3DS and PlayStation Vita between late July and early August of 2021. The exact timing seems to vary by region as some accounts state that the North American versions were available for a short time after the game’s disappearance was noted across Europe. As the various Asian releases remain available, published by Spike Chunsoft themselves, it would appear that the delistings relate to an expiration of Western publishing terms between Spike and Aksys Games.

The PlayStation 4 (AU, EU, NA) versions remained available until at least August 16th, 2022 when their absence was pointed out on a PSNProfiles forum post. We previously expected the PlayStation 4 version to be delisted around this time given its release one year after the Vita version.

Spike Chunsoft frequently picks up the publishing rights to their delisted titles but as of August 31st, 2022 they had not mentioned the 3DS or Vita versions on social media. However, Spike brought the game to Xbox One on August 30th giving hope that at least the PlayStation 4 versions will return at some point.

December 31, 2028. Nevada desert. Nine people have been living and performing experiments for the past five days in the Dcom facility. On the sixth day, they discover they are trapped in confinement rooms, an unfamiliar black bracelet strapped to their left wrists. A mysterious figure in a mask appears before them, demanding that they play the “Decision Game.”

“The lives of you, me, and the human race hang in the balance.” Transported to a shelter underground, they are divided into 3 teams and left in separate wards. Which team will manage to stay alive…? The fate of all mankind rests on their decision!

Zero Time Dilemma is the third entry in the acclaimed Zero Escape series. The mysterious “Zero” traps 9 participants within an underground shelter, dividing them equally between 3 wards that are connected to an elevator shaft in the middle. The only way out – passing through a locked X-Door to access the elevator. Six passwords are required to unlock the door, and each password is revealed only after a participant dies. Zero’s “Decision Game” will offer teams the opportunity to kill other participants through a variety of means to obtain the necessary passwords so they may escape.