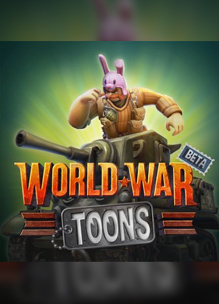 Studio Roqovan announced on August 1st, 2017 that the open beta release of World War Toons for PlayStation VR would be removed from the PlayStation Store on August 7th.

“All good things must come to an end.” Thank you everyone! We will be taking down the beta test version of our game from Playstation Store on the Aug 7th of 2017.

We had a blast conducting a beta test of our game on the PlayStation 4.  We can’t believe more than 500,000 of you downloaded our game since Oct of 2016.  Big thanks to the PSVR community as well.  We saw up to 15% of sessions with VR users all the time.

Through your help, we were able to discover critical network issues, and improve the gameplay.  We only wish, we could have shown you the changes going into the final version of World War Toons. For the worldwide release, we hope to cover other regions (Europe, we heard you), and implement some PS4/PSVR specific features (Aim Controller anyone?).

We will also have your purchase data stored, so that we can compensate you in the new game. Everyone here at Roqovan wants to thank you for your support.  Some of you have been a diehard fan, and stayed with us even before the beta release.

We will be sure to update you with future release news, so please follow us on our Facebook page.

You have seven days to try our current beta version on Playstation Store https://store.playstation.com/…

At the time the game remained in development alongside other World War Toons titles. World War Toons VR Arcade Experience debuted in physical VR arcades in Korea in March of 2019 where Roqovan also announced the closure of their studio.

Bigger bad news is that Studio Roqovan is no more. We really tried our best to make the game happen, but it wasn’t to be. World War Toons IP will continue on with a new company. However, the old game will have be put to sleep. Tank models will continue.

That new company would be STOIC Entertainment who would release a beta version of World War Toons: Tank Arena VR on July 26th, 2022 exclusively for Oculus/Meta devices. Previous to this, Studio Roqovan CEO James Chung explained some of the story behind the original game’s demise to UploadVR in March of 2019.

Long story short, it just comes down to slow adaptation of VR market’s growth and my failure to bring in enough funding to launch World War Toons properly and do live ops. We had our game up on PSVR for about 8 months. The main goal was to test gameplay and network issues. So the beta test was limited on the North American region on PS4 alone. We did see healthy amount of downloads initially and internally, we have a version of the game that was improved from this test. But this one was never shown to the public. But the production of this version had to halt due to the funding issue as mentioned earlier.

We did try to pivot into other unmentioned areas. And doing LBE based games was our attempt to ride through what a lot of people are calling the “VR winter”. But as you pointed out, we could not reveal a lot of what we were building with Metal Slug due to finalizing some of our agreements and it just did not lead to a place where it was reasonable for us to keep pursuing. All the complications lead us to drop Metal Slug IP and focus on World War Toons IP driven game as you saw from our announcement.

World War Toons is a cartoony first-person shooter where you never know if you’re going to turn the corner and see a rocket rushing towards you, grand pianos falling from the sky, or a massive tank staring you in the face.