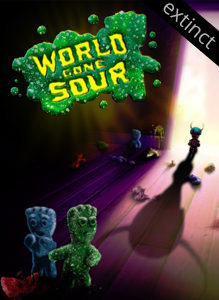 World Gone Sour was delisted from all platforms on or before August 3rd, 2015. This was the date that Twitter user lifelower confirmed that the game was no longer available on the Xbox Marketplace. The game was likely removed from the PlayStation Store and PC storefronts at the same time.

World Gone Sour was first teased in the Method Man music video “World Gone Sour (The Lost Kids)” released on October 4th, 2011 by KRAFT and ad agency, Mother New York. The game was announced on November 30th as a collaboration between developer Playbrains, production company Beefy Media, and publisher Capcom. The game was released on PC through Capcom’s digital store on December 20th with PlayStation 3 and Xbox 360 releases following on April 10/11 of 2012. While developed in Canada and requisitioned by KRAFT Canada, the game was only released in the US.

Between the inclusion of Method Man’s music video, the Sour Patch Kids license, and Beefy Media’s buyout by Flashman Studios, World Gone Sour has been rendered completely unavailable. Those who bought the game on Xbox 360 may still find it in their Purchase History but it is not possible to re-download it to the console. Product pages for the game on PlayStation Network, Capcom Store and Gamersgate have since been hidden or deleted.

“Based on the popular Sour Then Sweet® candy Sour Patch Kids®, World Gone Sour takes players on a journey from the perspective of a lost piece of candy finding its way to its ultimate destination – the human stomach. Gamers take on the role of a miniature Sour Patch Kid in a stylized human-sized world, guiding the hero through unique locations such as the sticky floors of a movie theatre and a concession stand counter. Joining forces with fellow lost Sour Patch Kids, players use a combination of jumps, twists and puzzle-solving to overcome larger than life obstacles.

In addition, the game will feature the recently released “World Gone Sour (The Lost Kids)” track from Grammy award-winning hip-hop artist Method Man. The journey of the Sour Patch Kids will include additional star personality with cheeky narrations by actor Creed Bratton (“The Office”), who will provide snack-sized quips and tidbits throughout the game.“