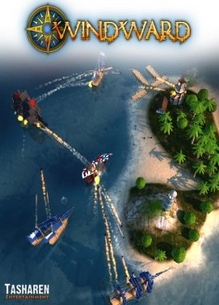 Windward was removed from GOG.com on October 17th, 2019. One day prior, GOG team member Chandra posted to the game’s forum to announce the impending removal:

We’d like to inform you that on October 17th, 1pm UTC, Windward will be delisted from our catalog. Those who already own the game, or will purchase it before its removal, will still be able to access it through their GOG.COM Library.

Discussion in the forum and references to Discord conversations imply that the removal was a conscious decision by the developer due to concerns over piracy of the GOG version of the game or GOG’s treatment of publishers. A definitive explanation has yet to be made by Tasharen Entertainment.

Windward is an action-filled sandbox game that puts you in control of a ship sailing the high seas of a large procedurally-generated world. Windward started as an arena-based action game that was prototyped in 2012, only to be put on hold in October of that year. It was restarted (almost) completely from scratch on August of 2014, going into Early Access in October as an action-filled naval sandbox game set in a large procedurally generated world. With nearly daily updates since then the game has progressed quite well with the help of the community’s feedback.