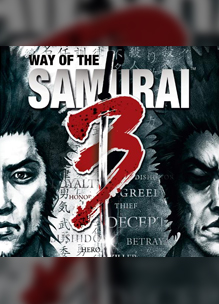 Way of the Samurai 3 was relisted on Steam on June 11th, 2021. Publishing rights have now changed hands from Ghostlight to Spike Chunsoft.

Way of the Samurai 3 was delisted on GOG.com on March 21st, 2021 and on Steam by March 24th, 2021. A Spike Chunsoft user account posted to Steam on March 22nd to explain that the delisting was caused by publishing rights changing hands from Ghostlight to Spike, and that the game would return to sale “ASAP”. In another reply the user confirmed that the game was not being replaced by an upgraded release, only the copyright information would be changed.

This change in publisher is certainly the reason the game was also removed from GOG.com but it is uncertain if it will return to that platform at this time. The Xbox 360 release in Europe and North America had previously changed hands and remained available across both regions at the time of this writing. Way of the Samurai 4 remained available on both Steam and GOG.com as of this writing but it is unclear if it will also go through a temporary delisting.

Honour, sacrifice, betrayal… Your choices make you who you are. How will history remember you?

You must wield the sword of a mysterious lone samurai during Japan’s turbulent Sengoku era, in one of the most atmospheric action RPGs ever created.

Explore the villages, body-strewn battlefields, bandit fortresses, immense castles and local town of Amana, in an open world bustling with a rich cast of colourful characters that you can help, ignore or victimise.

Choose your friends and enemies carefully in a game where every decision has far-reaching consequences, and where finishing the game is just the beginning of your journey…