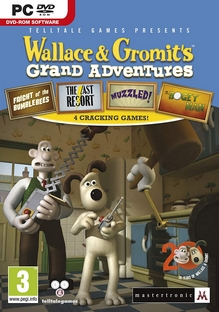 Strong Bad’s Cool Game for Attractive People was relisted on Steam and GOG.com on December 7th, 2020. Telltale Games announced on Twitter the same day that three titles from the “Telltale Archives” were back on sale: Wallace & Gromit, Strong Bad, and Telltale Texas Hold ‘Em.

Wallace & Gromit’s Grand Adventures (Episodes 1 through 4) were delisted from Steam and Xbox 360 in early January of 2014. On January 14th, 2014 a Telltale Games support page was updated with the explanation that the game “has been withdrawn from sale on digital platforms due to the expiration of our digital distribution agreement with Aardman Studios”. The post details how to re-download the episodes if they had been previously purchased and confirms that game won’t be returning, adding that “we currently do not have any plans to renew this agreement”.

Enter the colourful world of West Wallaby Street in a series of four cracking adventures brought to you by Aardman Animations, the creators of the Wallace & Gromit animated films, and Telltale, the award-winning studio behind Sam & Max.