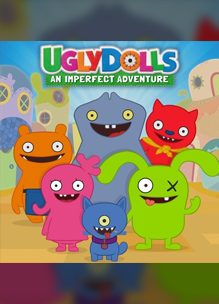 UglyDolls: An Imperfect Adventure was delisted from Steam on May 24th, 2021. The game’s absence on Nintendo Switch was pointed out to us on June 7th so the game may have remained available for a few weeks longer but has also been delisted on PlayStation 4 and Xbox One. Outright Games announced early on May 24th, 2021 that the game would be delisted from Steam “very soon” but did not indicate that it would happen later that same day.

Sadly, we have to announce our beloved Ugly Dolls will be dropping out of our Steam store very soon, so if you love these adorable creatures as much as we do, and would like to help them save their town in this imperfect adventure, now is your last chance. Explore Uglyville, search for collectibles, craft all sorts of items and help the Ugly Dolls send the intruder robots back to the institute of perfection!

It is likely that the delistings were caused by expired licensing of the UglyDolls property from Ugly Industries Holdings.

Robots are cool when they’re all blinking lights and zooming by with their sleek metallic finish. But what if they’re robots from a place called the Institute of Perfection?

In UglyDolls: An Imperfect Adventure, a whole horde of robots are on the loose and taking over Uglyville trying to make it “perfect!”. What is wrong with that, you might ask? Uglyville is a sweet neighbourhood where everything is a little off. The townsfolk are all uniquely different and embrace each other for their differences.

On the plus side, you get to be Moxy, the energetic UglyDoll who’s got a lot of “moxy”! You prefer Ox? That’s ok, pick him instead and play as the founder and mayor of Uglyville. As one of these characters, you’re about to team up with all your friends from the UglyDolls movie, explore the adorable quirkiness of Uglyville, and work together to send those uptight robots back to where they came from.

This robot invasion is sounding more and more like a party. And we haven’t even mentioned how you’ll meet lots more UglyDolls, interact with them, and collect or craft useful things that will help you capture and return the robots to their home. You will encounter things like pogo sticks and hover hats. You’ve never owned a hover hat before? Then your UglyDoll friends really hope you come on this robot party adventure. But do you have the courage not to run away from the pesky robots? No? Don’t worry. Moxy (or Ox) will run away with you or help you craft the “perfect” item to transport them home.

Thanks to Hasib Khanfor submitting this game to the site