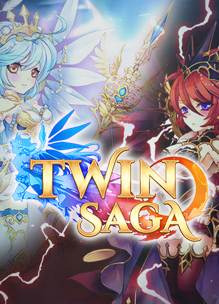 After 5 years in Twin Saga full of peaks and valleys together, the story of the twin goddesses, Marisa and Amaris, has come to an end. Today, with a heavy heart, we are sad to announce that Twin Saga will officially cease all operations on April 29, 2021.

This decision was not an easy one to make. We concluded that the game could no longer sustain itself. While we are discontinuing the game’s service, we will never forget the incredible journey we embarked on together. It is never easy to announce the shutdown of any game, knowing how much time and effort we have all put into making Twin Saga enjoyable for many years.

Starting on February 24, 2021, we will close the registration of new accounts, including the disabling of cash purchases.

Players whose accounts were created before the closure of registration and have already installed the game can still connect to the server and enjoy all game features until April 29, 2021. The following content will be available:

In the beginning, the Maker created the world. He chose the most brilliant, dazzling star… and called it “Aetherion.” A beautiful name for a beautiful creation. Calling upon the power of his Celestial Scale, the Maker then brought forth two goddesses. He entrusted the twins with the Calendar of Creation… within which was written the very fate of the world itself.

As foretold, the land came to flourish with life. Its people lived happily amongst the blessings that they were given, content with their place and purpose in the world. But after tens of thousands of years had passed… the Calendar of Creation approached its final page. The world needed a new calendar to govern its people, but the two goddesses could not agree upon its terms. Debate led to quarrel, and quarrel led to violence.

Any Class, Anytime!
Dive into the dynamic world of Twin Saga, where you can switch classes whenever you want! Need a DPS or a healer? Simply switch classes and charge back into the fray! There are five classes available at the start of your adventure with which you join the battle of Good vs. Evil. Choose between the Mage, Gunslinger, Swordmaster, and Dragonknight. You will unlock the other six classes during the game as you reach certain levels and finish selected quests.

Guild
It’s dangerous to go alone… you should join a guild! As a guild member, you’ll benefit from a dedicated chat channel and a Guild Palace with access to special merchants and events. You’ll even get a special emblem next to your character’s name! It’s also a great way to meet people in-game and makes it easy for you to group up on dungeon runs! You can, of course, form your own guild with your friends. From guild level 5 you will then have access to the Twin Saga Guild Palace.

TWIN SAGA PROFESSIONS
So what do you do for a living? In Twin Saga, you have many options (six, to be exact) when it comes to professions. Some are located outside your Terracottage and involve collecting materials for your crafting and cooking at home. As you get better at your profession, you’ll strengthen your body and mind, giving an enhancement boost to your stats. By leveling those professions, you will be able to craft better products!