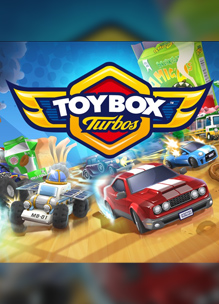 Toybox Turbos was delisted on PlayStation 3 no later than October 30th, 2021 when its absence was pointed out on a PSNProfiles forum post. The Xbox One backward compatible version was likely delisted around this same time.

After acquiring Codemasters in December of 2020, Electronic Arts updated the game’s Steam Store page on July 8th, 2021 to add themselves as publisher. The console versions may have been delisted closer to this timeframe. Toybox Turbos was delisted on Xbox 360 in October 2022.

The game was formerly available to stream on the PlayStation Now service until it was removed in February of 2022.

Fire up the fun as Codemasters reboots the classic table top racing experience in Toybox Turbos! Collect and customize 35 vehicles in this pick-up-and-play arcade racer. Take on 18 obstacle and short-cut filled circuits built for chaotic, combative competition – speed past spilt sticky jam on the kitchen table, dodge flaming Bunsen burners as you take your opponents back to school and dodge the runaway train as you race around a railway set!

Stay on track by using a range of awesome and ridiculous power-ups to send your rivals into a spin, including mines, machine guns and, of course, giant car-mounted hammers. Master six game modes in the single-player game, then turn friends into foes in manic four player multiplayer – local, online or with a mix – perfect for those one-more-go gaming session that race into the night! Toybox Turbos – the top-down racing game bursting with miniaturized mayhem, featuring dinosaurs, combine harvesters, golf-buggies and so MUCH more!