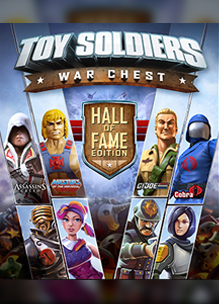 Toy Soldiers: War Chest is a fast-paced genre-bending mix of strategy defense and action gameplay that brings to life the iconic toys and action figures from your childhood. Lead from the strategic level, placing and upgrading turrets, or take direct command of your units and heroes to deliver assaults. Customize your loadout before battle and upgrade your arsenal while fighting through the main campaign, or grab a friend and take the fight online in multiplayer.