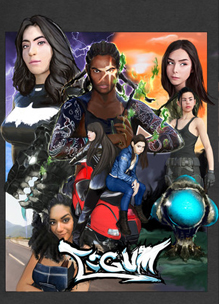 TOGUM was delisted from Steam on March 3rd, 2021. Solo developer, Dieggo Masamune, announced the delisting just three days into the game’s Early Access release, on February 25th. The brief notice stated simply, “I’m here to tell that TOGUM will be removed from the STEAM store soon. I’m sorry for the people who are disappointed and thanks for the support in the last days”. Two weeks after removing the game’s website and social accounts from the internet, Masamune updated again with a post explaining his decision on March 5th:

I’m really sorry for my absence, this post will be a little personal, but I owe you all a explanation: As some of you know, TOGUM was beign made by a single person (me), and unfortunately i’m not on my best moment lately. I lost my dad recently to the corona virus… he had 45 days of suffering on the hospital.. and i even couldn’t give him a farewell goodbye.. i still can’t.

All that was devastating for me and my family, and we are still trying to go back to our normal… With that, i can’t focus on the game entirely, as there’s so much things to do and you guys deserve a cool and fun game to play… so i couldn’t let it on the store on as the way it was…

It’s not fair keep selling the game if the people will not enjoy and have a good time. I can assure you guys that there is no legal problems on the game as everything was made by me or used with permission of it’s owners. Models, sounds, musics and even the easter eggs.

I thought I could keep working on it, but I couldn’t … One day i just stopped… i don’t opened my project until now. I had to ask my boss to go to a vacation because even my daily work has been hard to do it, i was having so many breakdowns i was worried. I know most of you are not happy with the game, which I respect and understand perfectly (i truly do!), so with all that, i decided to removed it from STEAM.

CREATION:
For people who are curious, i made TOGUM alone in 3 years, it was my first real experience on UNREAL ENGINE and game development, and even with the game not being a success, i really enjoyed and had fun doing it.​ At first i had only experience on 3D modelling, so TOGUM was a challenge. I made everything: the models, the programming, both c++ and blueprints, the animations (i know i have to improve them a lot), most illustrations and the maps… It was hard but it was a cool experience, and experience is something you will always carry with you, it helps you to improve.

THANKS:
Thanks a lot for all the supportive messages you guys sent me, i’m sorry couldn’t answer all of them.. sometimes is hard be in the front of the computer… but i saw most of them, and i’m very grateful for your support and hints of how i could improve the game. I can’t thank enough the people who helped me to do it and i’m sorry if TOGUM wasn’t the game you guys wanted, it never was my intention to bring you a bad game or story. I only wanted to show what i made.

And if i can be personal again, if you have time, show your parents how much you love and respect them while you guys are still together.. be supportive and take care of them..

Sorry i didn’t made this post earlier, it’s difficult to talk about it.. even now. TOGUM’s future is uncertain, but thank you for your support and all the kind messages. I hope you guys still follow my work and still give me a chance as a indie game developer. Stay Safe and thanks for reading so far!

– Life starts with an egg .. and it can also end because of it.

TOGUM is an Action RPG divided by chapters that takes place in Brazil in the near future. Created in the laboratory, TOGUM are the result of a genetic experiment that escaped their laboratory. As they reproduce quickly, in a few days, there were millions of them all over the country. Without having time to create a strategy and as they are extremely violent, it is believed that TOGUM ended up killing at least 90% of the Brazil’s population, the other countries’s situation is unknown.

You take control of the young Marshal Dante Masamune, the only human being who, by accident, became a human-togum hybrid, a fact that gave him superhuman strength and abilities. Now he, his childhood friend Nicole and his friend Danielle , go on missions together trying find who was responsible for all this and end up discovering that this is the last chance of humanity to save itself ..

Or they all come together … or they will all perish.