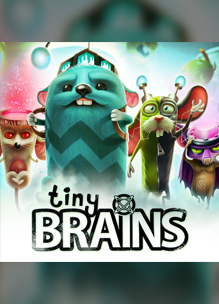 Tiny Brains was likely delisted in April of 2019, around the same time that publishing rights changed hands from 505 Games to developer Spearhead Games on Steam. Site reader Detelin reached out to Spearhead about the delisting in May of 2021 and received the following response:

Our publisher who controls the publishing rights has delisted the game from PS4. And therefore unfortunately we are unable to help.The game is still available on Steam. Wish you the best.

Spearhead Games publishes their other titles on PlayStation 4 but are apparently unable to bring Tiny Brains back to sale. Tiny Brains remained available on the PlayStation Now streaming service until approximately June of 2022 when the PlayStation Plus program was updated to incorporate some of the streaming titles from PS Now and causing several others to be removed from streaming access.

“Tiny Brains” is a cooperative action puzzler that follows four super-powered lab animals in their attempt to escape a mad scientist’s experiments. In this joyously chaotic multiplayer game, the four “Tiny Brains” must combine their unique physics-based powers to navigate through a trick-ridden maze. All of the puzzles in “Tiny Brains” can be solved multiple ways depending on how groups combine their powers. The game has competitive and challenging fast paced communicative play along with simple controls so players of any level can jump right in.

Thanks to Detelin for submitting this game to the site