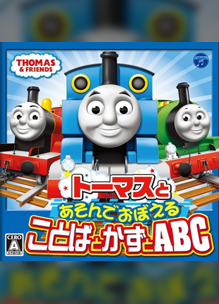 Thomas to Asonde Oboeru Kotoba to Kazu to ABC was delisted from the Nintendo 3DS eShop in Japan on April 1st, 2016. The delisting was likely caused by expired licensing of the Thomas the Tank Engine property from Gullane Limited.

Google Translation:
It is a learning software that you can learn while enjoying the basic academic abilities that you want to master before school, such as words, kazu, ABC, colors and shapes, with Thomas and others. In addition to 24 various lessons, you can learn how to write letters with the “reading and writing pad”, and also include fun functions such as “Thomas Encyclopedia” that you can do your best to learn.

★ Enjoy training with 24 lessons!
You can learn a wide range of educational problems while adventuring with Thomas on Sodor Island. If it is training good grades, “reward” is I get, also continued motivation of the child!

★ you study at Thomas voice! Can even one person with a voice guide!
Story scene and reading and writing pad, such as Thomas of where major You can play with your voice. The operation method is also explained by voice, so even children who cannot read letters are safe.

★ Introduced in the voice of Thomas!
Collect the super- rich “Thomas Zukan” rewards to complete the “Thomas Zukan” containing the 156 characters that appeared in the TV series and theatrical version!